The Ups and Downs of a Mutli-Modal Bike Tour

I am back in Seattle after a whirlwind journey of the Pacific Northwest book tour to promote Pedal, Stretch, Breathe: The Yoga of Bicycling, using a combination of bicycles, trains, ferry boats and buses. The map below, made by Tom, shows how we pieced together our travels.

As any bike tour there will be some very literal ups and downs to the trip, especially in the Pacific Northwest. The trip was incredibly fun and rewarding, with many more ups than downs. The combination transit and biking really opened up a greater distance we could travel in a short period of time. Combining bikes with other ways to get around was efficient for our time and energy. This trip was really enlightening and I’d like to share with you some things I learned.

Since the tour centered around events that were at scheduled times it was really important we had enough time to actually make it to the event. The bus can be really helpful for speeding up things. But also don’t count on making that bus or having room for your bike on it. Since many buses only have spots for two or three bikes, sometimes there is no room for you and you have to catch the next bus. Our friend Danny joined us for camping near the end of tour. When we were trying to get from Deception Pass to Langley by noon, Island transit was pretty vital to us making it on time.  I highly advise to bike to the point where the bus starts. We took all three spots, so there were people with bikes who had to take the next bus. This totally sucks and can happen. It also speaks to the need of more bike spots on buses. 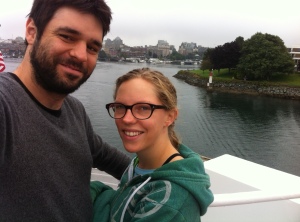 Take Ferry Boats & Trains because they are fun

Taking the Cascades train especially because you don’t need to box up your bike for this train. The down side of course is that there is a $5 fee to put your bike on the train. The scenery on the train is great, I loved seeing the stunning mountains, farms, seas and forest. I enjoyed traveling by the train a lot and wish more Amtrak lines had bike spots like the Cascades.

Biking on Washington Ferry Boats rocks. There are lots of spots for bikes. The B.C. boat we took from Tsawwssen to Swartz Bay was very big and fancy, but there were only two specific bike spots, not enough to accommodate all of the bikes. There was another cyclist who had to just lean his bike elsewhere.

You will still get enough bike riding in, even if you don’t bike the whole way.

On a bicycle it is really easy to make connections between different towns and once we arrived bikes helped us explore the town we are staying in. It was also fun to compare bike infrastructure, like all the protected bike lanes in Vancouver or in Corvallis which has bike lanes on almost every street.  As it turns out, sometimes the train station is not at all in the town it claims to be in (Olympia) so you get to explore in between towns too. We definitely got to explore beautiful trails and remote roads in between towns, one of my favorite rides was on Lake Samish Drive, just South of Bellingham.

Please join me this Saturday at 4pm at Timbuk2 Store on 7th & Pine Downtown for my Pedal, Stretch, Breathe: The Yoga of Bicycling Reading and Release Party!

There will be giveaways for the first 25 folks who have registered that show up, a raffle, a slow bike race and more! Hope to see you there.

A special thanks to Timbuk2, Cascade Bicycle Club and The Seattle Bike Blog

This entry was posted in Uncategorized. Bookmark the permalink.